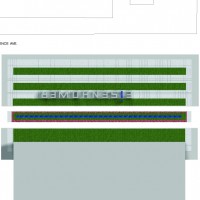 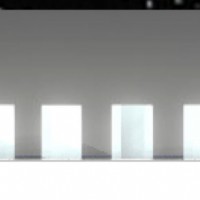 I see the monument reflecting Eisenhower’s life and personality. Ike had a strong military mind, was a father figure and statesman which inspired me to generate a transparent glass formation of his name spelled out and extruded 25 feet high and visible from the Maryland Avenue view corridor as well as other roads. The letter “E” will have etching of face pondering and “I like Ike” notation. The letter “I” will be a water feature. The structural glass is held at 5′ modules with stainless steel support connections.

Maryland Avenue is reformed behind the monument’s image and becomes part of the overall scheme. The landscape formation resembles the stripes of the American flag. Each letter of his name is ground lit at night with a combination of stainless steel grilles that makes the image of each letter more visible during daytime. The name Eisenhower also becomes apparent from the top sky view as each letter is caped with solar panels making it apparent during day as well.