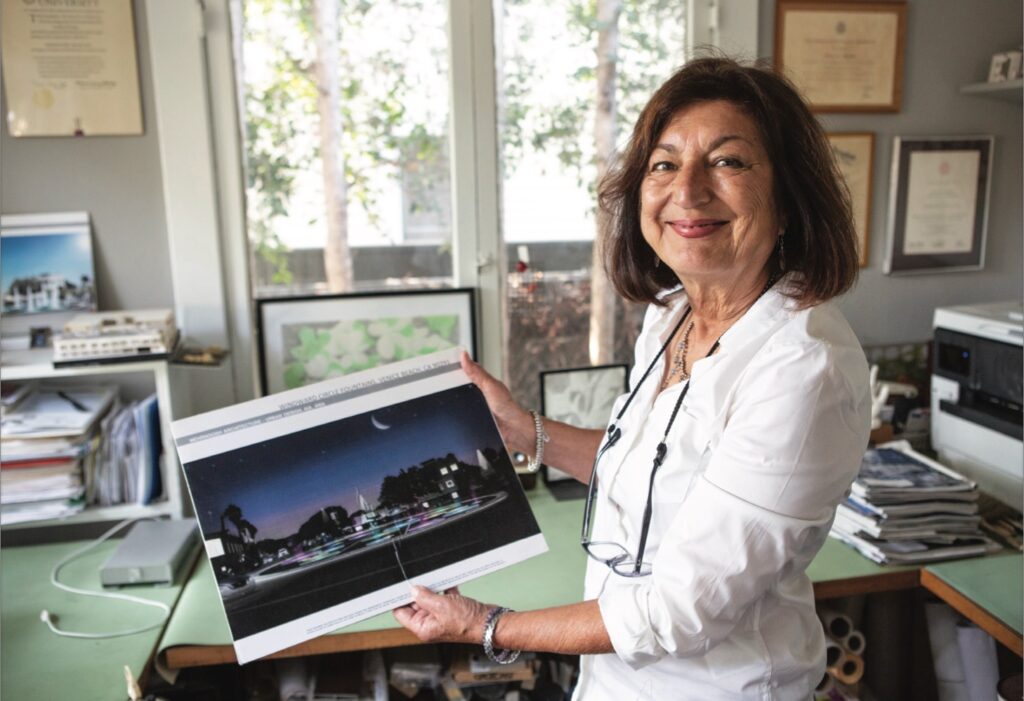 Mehrnoosh Mojallali knew at a young age that she wanted to be an architect. Persistence and hard work made that dream come true. Her work can be found internationally — from Saudi Arabia to Montreal — but her focus is on her community of Venice, which is a world away from where she spent her early days.

As a small child in Iran, Mojallali turned to drawing for comfort during a tough time. “My mom left when I was a little baby,” she says. “ She was from an aristocratic family. She left Iran because she was very strong and could not deal with the suppression of women. She moved to Pasadena in the early 1960’s. I joined her 1966.”

She spent much of her time on her own. “My dad didn’t know what he was doing so I was very independent in doing my own things. I would spend my time on the rooftop, looking at the sky and drawing. That’s where it all started — with the sky and nature.” 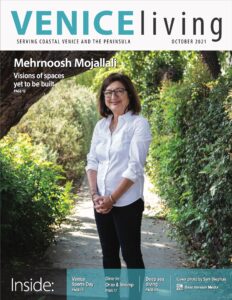 As a teenager, she moved to Pasadena to be reunited with her mother, sister and brother. “I was the only foreigner in my high school who didn’t speak English,” she says. “The country (Iran) was not well known then, so I would say, ‘Persia’ and they would say, ‘Oh, Peru!’ I just concentrated on my drawing. That was my savior.”

The locals may not have known much about her homeland but she says they made her feel right at home. “Pasadena was amazing for me,” she explains. “When I came here, I was so shy. It was the first time I had faced other cultures. But they were sweet to me — taking care of me, walking me home. Doors were open.”

In high school, she also had support from the faculty and she took her art as far as instruction allowed. “I took 3D drawing and I finished it in one-third of the time,” she says. “They gave me stuff to do and then I finished that. They doubled the program so I could do more drawings there. That’s when I knew I wanted to be an architect.”

She started college close to home. “I went to Pasadena City College but I wanted to move on,” she says. Her choice was studying architecture at the University of Oregon. She moved there, graduating with her bachelor’s degree in 1973. “I loved it there, too. It was so fantastic — the program, the environment. I used to walk by the river to go to college. I didn’t have a car.” 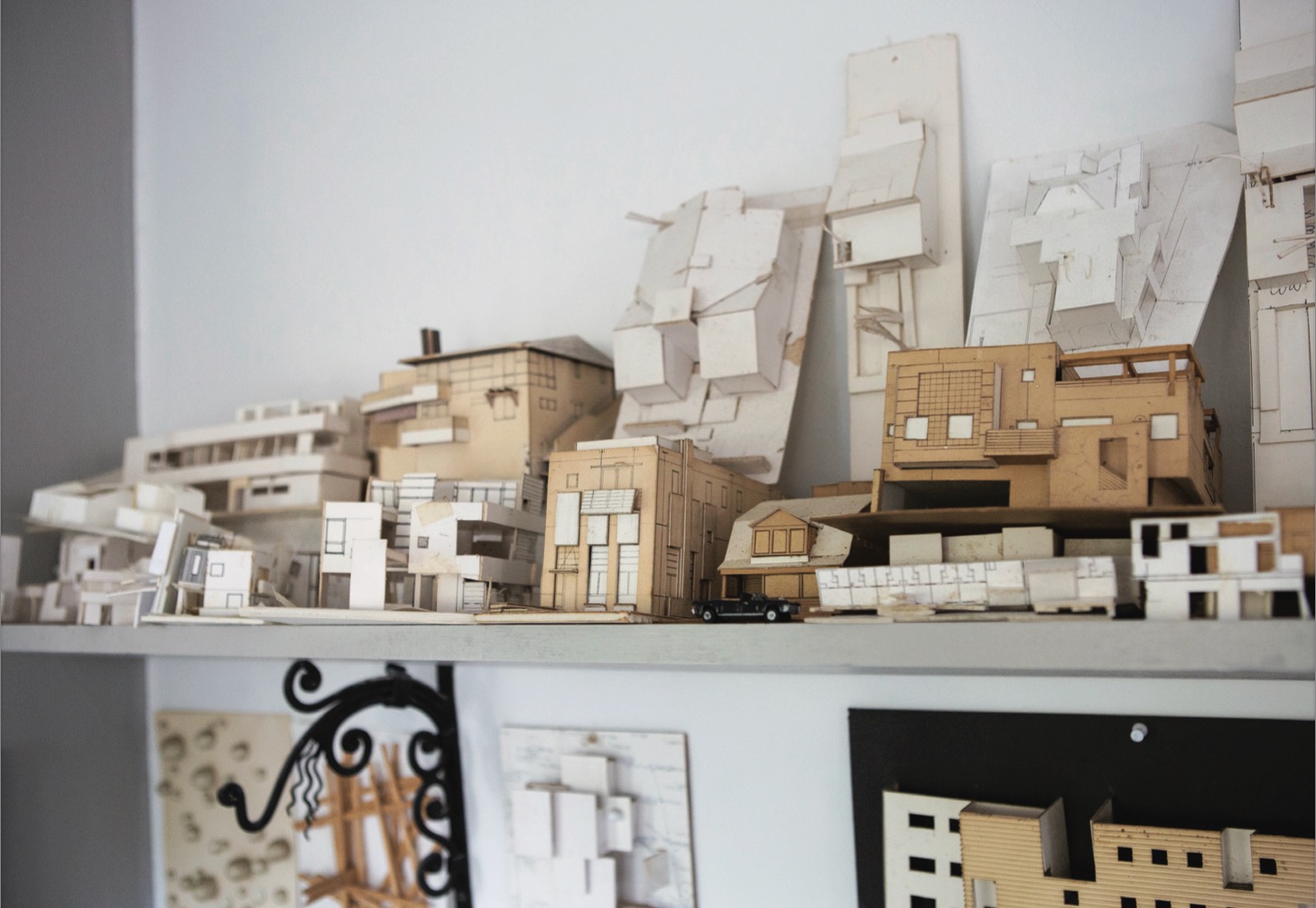 After college is when Mojallali discovered Venice. She was living in nearby Westwood and had a boyfriend who lived near the boardwalk. “I used to come here in the 70s,” she says. “I was here every day. It was so fantastic then. Lincoln Boulevard had movies every day and they had music everywhere. People would invite you in — it was just a lively, friendly community. I was going to live here but I found out I was accepted to Harvard.”

So, instead of settling down in Venice, she set off to Cambridge, Massachusetts, where she earned a Masters of Architecture & Urban Design from the Harvard University Graduate School of Design. Once again, she found herself a minority — this time, in her department. “I was the only woman there,” she says. And, again, she found her way. “There was so much more I was interested in — cultural issues, urban design and how it really affected people.”

After Harvard, she moved to New York, where she worked with the internationally recognized Chinese-American architect I.M. Pei. “His work was outrageous — huge hotels, great architecture, projects around the world. One of our projects was on the waterfront in Montreal.”

She describes working with Pei as collaborative. “He was a major, major designer on the projects and we were helping him,” she explains. “Sometimes, when we were designing things, you’d (designers) just go back and forth with each other and he would direct us.”

She says, at one point, she had hoped to return to Iran but the 1979 revolution, in which the Shah was overthrown, made that impossible. “When I wanted to go back, the revolution broke,” she says.

Instead, she traveled the world, long before the days of smart phones, hotel websites and cellular navigation. “I would get myself to the airport and go to Italy or London,” she says. “I didn’t have any reservations — I would just find my way around. I wasn’t scared of anything.”

The hectic pace of life in New York City left Mojallali yearning for a quieter place. “I always wanted to come back to Venice,” she says, add- ing that the desire became even stronger when she became a mother and grew tired of the long hours her job required. “I thought, I can’t be there at 7 in the morning and be there until 7 at night. I’m coming back to Venice.”

She headed west in 1984, and raised her son and daughter in Oak- wood, a Venice neighborhood that she says, “still feels like home.” She worked as a consultant for large firms before going solo, in 1988, with Mehrnoosh Architecture/Urban Design.

“It’s a little easier to stay up until 4am when you’re in your own office,” she says. “It was hard to work as a woman in a big company. In my profession, if I had been a male architect, or had a partner who was a male, people would feel more secure.” 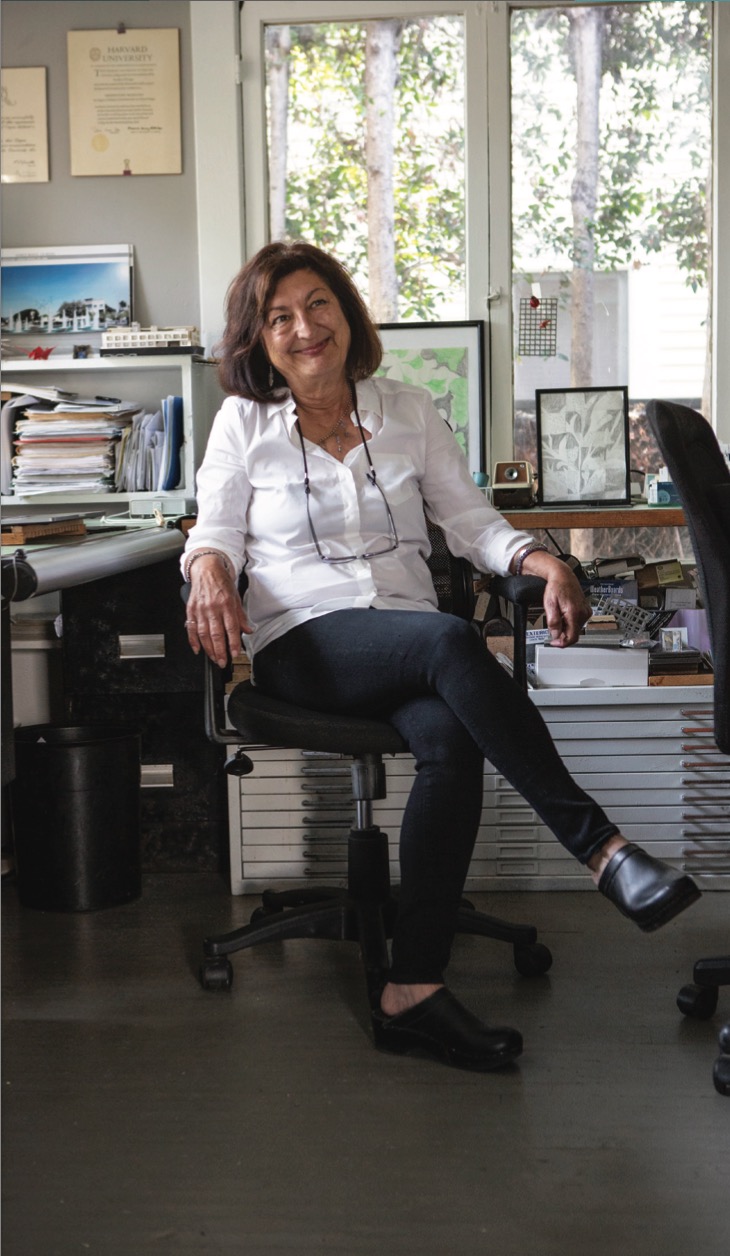 To fight the that mentality, she channeled her annoyance into advocacy, becoming president of the Association for Women in Architecture – Los Angeles, where she served from 2007-2008 and then spent the following two years in a supportive role. “I really wanted to promote women,” she says. “At that point, the association was not large but we had some great, smart ladies.”

“Venice has communities,
it has diversity — it’s alive.“

Mojallali has seen, firsthand, how undervalued smart women are in certain cultures. “A schoolmate from Pasadena was in Saudi Arabia doing a 67-unit rental (building) for men,” she says. “No women could come in.” When working on the project, she learned that women were welcome only in the public areas, so she gave those areas some special attention. “I made the center fabulous — with landscaping and waterfalls.”

She credits her mother for inspiring her passion to support women and women’s rights. “I’ve also have had a lot of experience in my profession, as I worked with big offices, construction sites and at schools, being the only woman most times.”

Mojallali counts creating public spaces, and urban design, among her favorite projects. “As an urban designer, I’m so passionate about public spaces where people can come together,” she says. “I love a big project, where you can be creative and make a big change.” She points out that creating gathering places can benefit the whole community and, sometimes, bring economic rewards. “When there were theaters here, people would pay money to go to the theater. People love that stuff.”

A few years ago, she proposed two public projects for Venice. One was a community center, “where all ages can come to celebrate and meet and bring their dogs as well,” she says. The other project is a large fountain and gathering area at Windward Circle. “It’s a fabulous place for families. It helps environmentally as well as ecologically and visually. It would be a great place.”

She says she’s also working on proposals for some public areas near the boardwalk. ‘’I’m passionate about people coming together, having fun, having spaces where they can get involved,” she says. “It enhances your life to have places to go and have fun.”

She currently serves on the Land Use and Planning Committee (LUPC), which oversees public discussion on proposed land use and development projects and reports their possible social and economic impact to the Venice Neighborhood Council. She describes Venice as, “an area with walking streets, canals, a boardwalk, and commercial areas. All those have certain elements and requirements for zoning and planning.”

Like many of the people served by the committee, Mojallali is a full- time resident of Venice. It’s the place she works and also where she unwinds. “I love the ocean,” she says. “I come to the boardwalk. I meet the people that I know. There are wonderful people around here.”

Her time off is spent pretty much like her work day — with lots of drawing. “What I really like to do is my work,” she says. “I love doing drawings, not just for clients but for myself. I also go to museums and galleries and wherever there is music. I used to go to galleries every day when I would go out but, now, I just come to the beach.”

“When you finish a drawing, you look at it and say how did I do that?”

She also has a passion for photography but admits that even her photographs usually end up as drawings. “When I take pictures of things — weeds, flowers — I sit down and draw it. You just block out everything else. When you’re drawing, it requires so much concentration that, when you finish a drawing, you look at it and say how did I do that?” 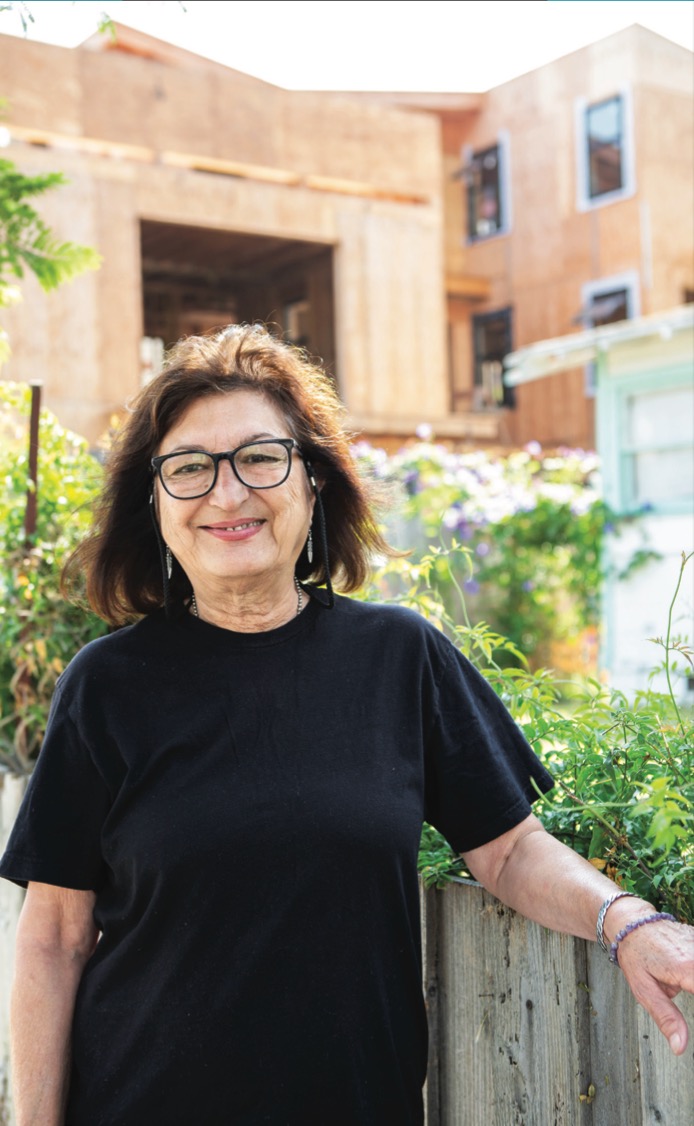 Mojallali enjoys drawing with other architects and artists. “I used to draw with a group of women,” she adds, “We would get together and do a lot of drawings but Covid screwed that up.” She says she’s looking forward to enjoying the social time again.

A multiple-unit project she completed in 1988 earned her an award for “outstanding citizenship and activities enhancing community betterment.”

“It’s called the Island of America,” she says. “At the time, there were eight little bungalows there,” she explains. “I was making it into 12 units.”

Mojallali currently has three local residential projects under construction and one going through the permitting process. She’s also done pro bono work for local non-profits, including A Safe Place for Youth. “When I know it involves a lot of people and community and service, I like to be involved,” she says.

It’s always a bit startling, Mojallali says, when she looks back at her early days in her Pasadena classes and realizes how far she’s come. “It surprises me sometimes,” she says. “There was no direction — I was just going from one thing to the other.” Yet she ended up in welcoming, diverse, vibrant Venice. I’ve been here longer than I’ve been anywhere,” she says. “Venice has communities, it has diversity — it’s alive.“